Actelion's drug discovery software predicts various physico-chemical properties and other criteria that help to evaluate whether a chemical compound may serve as a promising drug candidate not taking specific target information into account:

For comparing the inhibitory potential towards a specific target prioritizing compounds based on their activities alone inevitably creates a strong bias towards lipophilic and high molecular weight compounds. Activity values should rather be normalized considering the compounds molecular weights and/or lipophilicity. Normalized activity measures commonly used are:

The toxicity risk assessment tries to locate substructures within the chemical structure being indicative of a toxicity risk within one of four major toxicity classes. Risk alerts are by no means meant to be a fully reliable toxicity prediction. Nor should be concluded from the absence of risk alerts that a particular substance would be completely free of any toxic effect.

In order to assess the toxicity prediction's reliability we ran a set of toxic compounds and a set of presumably non-toxic compounds through the prediction. The diagram below shows the results obtained by predicting all available structures of four subsets of the RTECS database. E.g. all structures known to be mutagenic were run through the mutagenicity assessment. 86 % of these structures where found to bear a high or medium risk of being mutagenic. As a controlset served a collection of traded drugs of which the mutagenicity risk assessment revealed only 12 % of potentially harmful compounds. 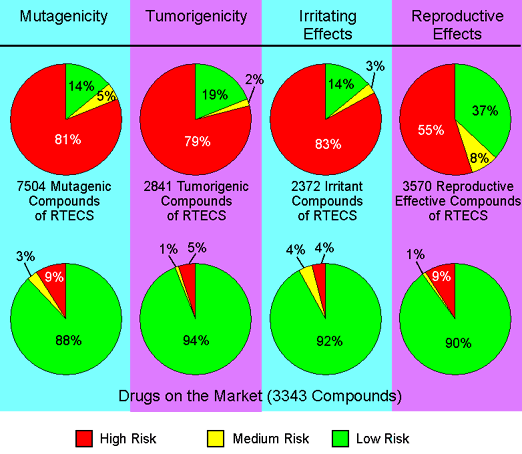 The prediction process relies on a precomputed set of structural fragment that give rise to toxicity alerts in case they are encountered in the structure currently drawn. These fragment lists were created by rigorously shreddering all compounds of the RTECS database known to be active in a certain toxicity class (e.g. mutagenicity). During the shreddering any molecule was first cut at every rotatable bonds leading to a set of core fragments. These in turn were used to reconstruct all possible bigger fragments being a substructure of the original molecule. Afterwards, a substructure search process determined the occurence frequency of any fragment (core and constructed fragments) within all compounds of that toxicity class. It also determined these fragment's frequencies within the structures of more than 3000 traded drugs. Based on the assumption that traded drugs are largely free of toxic effects, any fragment was considered a risk factor if it occured often as substructure of harmful compounds but never or rarely in traded drugs.

There are many approaches around that assess a compound's druglikeness partially based on topological descriptors, fingerprints of MDL struture keys or other properties as cLogP and molecular weights. Our approach is based on a list of about 5300 distinct substructure fragments with associated druglikeness scores. The druglikeness is calculated with the following equation summing up score values of those fragments that are present in the molecule under investigation:

The fragmentlist was created by shreddering 3300 traded drugs as well as 15000 commercially available chemicals (Fluka) yielding a complete list of all available fragments. As a restriction the shredder considered only rotatable bonds as cuttable. In addition the substitution modes of all fragment atoms were retained, i.e. fragment atoms that hadn't been further subtituted in the original compounds were marked as such and atoms being part of a bond that was cut were marked as carrying a further substituent. This way fragment substitution patterns are included in the fragments.

The occurence frequency of every one of the fragments was determined within the collection of traded drugs and within the supposedly non-drug-like collection of Fluka compounds. All fragments with an overall frequency above a certain threshold were inverse clustered in order to remove highly redundant fragments. For the remaining fragments the druglikeness score was determined as the logarithm of the quotent of frequencies in traded drugs versus Fluka chemicals.

A positive value states that your molecule contains predominatly fragments which are frequently present in commercial drugs. What it doesn't necessarily mean, though, is that these fragments are well ballanced concerning other properties. For instance, a molecule may be composed of drug-like, but lipophilic fragments only. This molecule will have a high druglikeness score although it wouldn't really qualify for being a drug because of its high lipophilicity.

The drug score combines druglikeness, cLogP, logS, molecular weight and toxicity risks in one handy value that may be used to judge the compound's overall potential to qualify for a drug. This value is calculated by multiplying contributions of each of the individual properties by the first of these equations:

ds is the drug score. si are contribution values calculated directly from cLogP, logS, molweight and druglikeness (pi) by the second equation. This equation describes a spline curve with contributions ranging from 0 to 1 depending on the respective property value. Inversion point and slope of the curve are determined by parameters a and b, which are (1, -5), (-1, -5), (0.012, -6) and (-1, 0) for cLogP, logS, molweight and druglikeness, respectively. ti are the four contributions reflecting the four types of toxicity risks. The ti values used are 1.0, 0.8 and 0.6 for no risk, medium risk and high risk , respectively.

The ligand efficiency is a measure for the activity normalized by the number of non-H atoms. More precisely, it is the relative free binding energy in kcal/mol per non-H atom, calculated from an IC50 value. Especially in early project stages prioritizing compounds based on their ligand efficiency values is a much more favorable approach compared to judging from plain activities alone: "For the purposes of HTS follow-up, we recommend considering optimizing the hits or leads with the highest ligand efficiencies rather than the most potent..." (Ref.: A. L. Hopkins et al., Drug Disc. Today, 9 (2004), pp. 430-431).

To give an example: A compound with 30 atoms (400 MW) that binds with a Kd=10 nM has a ligand efficiency value of 0.36 kcal/mol per non-H atom. Another compound with 38 non-H atoms (500 MW) and the same ligand efficiency would have a 100 fold higher activity with Kd=0.106 nM. Let us assume an HTS screening revealed two hit compounds A and B with equal activities of IC50=10 nm, but different molecular weights of 400 and 500, respectively. Based on activities both compounds look equally attractive. Considering, however, that a synthetic introduction of a new group with 8 non-H atoms into compound A would match compound B in terms of weight, but would increase the activity by a factor of 100, if its ligand efficiency value can be maintained, it becomes clear that compound A is the by far more attractive alternative.

The LLE value is a builds on the fact that the typical compounds of drug discovery projects huddle at the lipophilic side of the acceptable lipophilicity range. A gain in lipophilicity therefore is associated with a loss in bioavailability and should be compensated by higher activity on the target. To express this relationship the LLE is calculated as LLE = -log IC50 - cLogP. A rough rule of thumb may be the suggestion of Jonathan S. Mason from Lundbeck Research to aim for LLE values above 3 for lead compounds and above 5 for clinical candidates.

Since the ligand efficiency doesn't take lipophilicity into account while the LLE neglects the molecular weight influence, Keseru and Makara suggest using the LELP value instead: "... So, we propose simply to use LELP = logP / ligand efficiency as a useful function to depict the price of ligand efficiency paid in logP. Medicinal chemists who are familiar with both logP and ligand efficiency can easily relate to the change in logP per ligand efficiency unit. As such, LELP is negative only when logP is negative, and the higher the absolute value of LELP the less drug-like the lead compound. The widely accepted lower limit of ligand efficiency has been 0.3, and the lipophilicity range for lead-like compounds is -3 < logP < 3. These values define the range -10 < LELP < 10 for acceptable leads, and LELP would have to be less than 16.5 for compounds that are in the Lipinski zone. For typical lead discovery projects, the closer LELP is to zero in the positive range, the better. In our experience a truly good hit or lead in the early optimization stage has a ligand efficiency > 0.40-0.45 and 0 < logP < 3. So, the desirable range for LELP is between 0 and 7.5. LELP becomes a useful function to follow during hit-to-lead optimizations, as for typical lead discovery projects LELP should be moving towards zero with improving potency." (Ref.: G. M. Keseru & G. M. Makara, The influence of lead discovery strategies on the properties of drug candidates, Nature Rev. Drug Discov. 3, 203-212 (2009))