Molecule or Reaction Similarity and Descriptors

Molecule and reaction similarities play an important role in DataWarrior. They are calculated, when using a filter to focus on a similar molecule subset and they are used to customize views, e.g. to color, size or position markers based on compound similarities. Some data analysis algorithms, which typically use alpha-numerical input information, may also consider compound similarities, e.g. self organizing maps. In addition many dedicated cheminformatics analysis methods need a similarity criterion to wor with, e.g. an activity cliff analysis, or compound clustering. DataWarrior supports various kinds of molecule similarities. These range from a simple chemical similarity based on common substructure fragments up to a binding behaviour similarity that considers 3D-geometry of conformers and the interaction potential to proteins.

When DataWarrior calculates a similarity value between two molecules, then the calculation is not performed on the molecular graphs directly. It rather involves a two step process:

Naturally, the kind of features being collected and the algorithm used to compare these features, have a crucial influence on the kind of similarity being calculated. Therefore, the chosen descriptor for similarity calculations depends very much on the purpose. For molecules DataWarrior supports three different binary descriptors and three more advanced similarity methods. These and a reaction descriptor are all explained here in more detail.


Which Descriptor Should Be Used For Which Purpose

If the purpose is to filter a large compound collection by chemical structure similarity, the default descriptor FragFp is a good choice, because it is automatically available, it does not require much space and similarity calculations are practically instantanious.

If more fine grained similaries need to be perceived, e.g. if stereo isomers need to be distinguished or to achieve best results from clustering or any kind of similarity analysis, then the SkelSpheres descriptor should be taken. Especially, when creating an evolutionary library in vast virtual compound space, then the SkelSpheres descriptor outperformes the binary fingerprints in quality, because it considers multiple fragment occurence and makes hash collisions unlikely.

When chemical functionality from a synthetic chemist's point of view is more important than the carbon skeleton that carries this functionality, the you should try the OrgFunctions descriptor. Examples are searching a chemicals database for an alternative reactant to a reaction or arranging a building blocks collection in space based synthetically accessible functionality.

DataWarrior's default descriptor FragFp is a substructure fragment dictionary based binary fingerprint similar to the MDL keys. It relies on a dictionary of 512 predefined structure fragments. These were selected from the multitude of possible structure fragments by optimizing two criteria: All chosen fragments should occurr frequently withing typical organic molecule structures. Any two chosen fragments should show little overlap concerning their occurrence in diverse sets of organic compounds. The FragFp descriptor contains 1 bit for every fragment in the dictionary. A bit set to 1 if the corresponding fragment is present in the molecule at least on time. In about half of the fragments all hetero atoms have been replaced by wild cards. This way single atom replacements only cause a moderate drop of similarity, which reflects a chemists natural similarity perception.

In addition to calculating molecule similarities DataWarrior uses the FragFp descriptor for a second purpose: The acceleration of the sub-structure filtering. Since a sub-structure search is effectively a graph matching algorithm and therefore computationally rather demanding, DataWarrior employs a pre-screening step that can quickly exclude most compounds from the graph-matching. In this step DataWarrior determines a list of all dictionary fragments, which are part of the sub-structure query. Molecules that don't contain all of the query's fragments cannot contain the query itself. Therefore, these are skipped in the graph-matching phase.

The PathFp descriptor encodes any linear strand of up to 7 atoms into a hashed binary fingerprint of 512 bits. Therefore, every path of 7 or less atoms in the molecule is located. In a normalized way an identifying text string is constructed from every path that encodes atomic numbers and bond orders. From the text string a hash value is created, which is used to set the respective bit of the fingerprint. The PathFp descriptor is conceptually very similar to the 'folded fingerprints' that software of Daylight Inc. uses for calculating chemical similarities.

The SphereFp descriptor encodes circular spheres of atoms and bonds into a hashed binary fingerprint of 512 bits. From every atom in the molecule, DataWarrior constructs fragments of increasing size by including n layers of atom neighbours (n=1 to 5). These circular fragments are canonicalized considering aromaticity, but neglecting stereo configurations. From the canonical representation a hash code is generated, which is used to set the respective bit of the fingerprint. In the literature spherical fingerprints are sometimes referred to as HOSE codes and are in use for spectroscopy prediction.

When a more subtle structural similarity is needed, the SkeletonSpheres descriptor should be used. It is related to the SphereFp, but also considers stereochemistry, counts duplicate fragments, in addition encodes hetero-atom depleted skeletons, and has twice the resolution leading to less hash collisions. It is the most accurate descriptor for calculating similarities of chemical graphs. On the flipside it needs more memory and similarity calculations take slightly longer. Technically, it is a byte vector with a resolution of 1024 bins.

The OrgFunctions descriptor is neither a fingerprint nor an integer vector. It rather stores all synthetically accessible functions of the molecule in a finely grained way. DataWarrior distinguishes 1024 core functions, which typically overlap. Butenone for instance is recognized as vinyl-alkyl-ketone as well as a carbonyl-activated terminal alkene. All 1024 functional groups are organized in a tree structure that permits deriving similarities between related functions. These are taken into account, when the similarity between two molecules, i.e. OrgFunctions descriptors, is calculated.

The Flexophore descriptor allows predicting 3D-pharmacophore similarities. It provides an easy-to-use and yet powerful way to check, whether any two molecules may have a compatible protein binding behavior. A high Flexophore similarity indicates that a significant fraction of conformers of both molecules are similar concerning shape, size, flexibility and pharmacophore points. Different from common 3D-pharmacophore approaches, this descriptor matches entire conformer sets rather than comparing individual conformers, leading to higher predictability and taking molecular flexibility into account.

The calculation of the Flexophore descriptor is computationally quite demanding. For a given molecule it starts with the creation of a representative set of up to 250 conformers using a self organization based algorithm to construct small rigid molecule fragments, which are then connected with likely torsion angles. This conformer generation approach balances high diversity and conformer likelyhood. Then, the atoms of the underlying molecule are detected and classified, which have the potential to interact with protein atoms in any way. De-facto an enhanced MM2 atom type is used to describe these atoms as interaction point. In some cases multiple atoms contribute to one summarized interaction point, e.g. in aromatic rings. 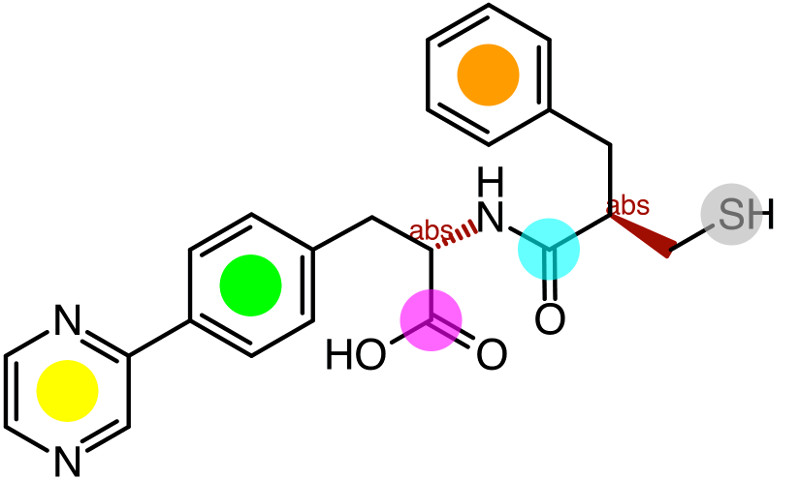 A molecule's Flexophore descriptor now consists of a reduced, but complete graph of the original molecule with the interaction points being considered graph nodes. A graph edge between two nodes is encoded as a distance histogram between these nodes over all conformers. Since the Flexophore descriptor is a complete graph, every combination of any two nodes is encoded and stored as part of the descriptor. Thus, the descriptor creation as well as the similarity calculation from two descriptors depend heavily on the number of interaction points in each of them.


The RxnFp Descriptor for Reactions

As the descriptors above describe certain molecules features, the RxnFp descriptor comprises features that describe a chemical reaction. It is related to the SphereFp descripor, because it is a binary fingerprint, whose bits encode circular fragments of atoms and their environment. This descriptor uses 1024 bits of which the first half is dedicated to describe the reaction center and the second half encodes atoms, which don't take part in the reaction, i.e. which neither loose or gain a neighbor atom nor change a bond order to any of its atom neighbors. Thus, this descriptor relies on a proper mapping of product atoms to reactant atoms. It cannot be calculated for unmapped reactions.

In contrast, the reaction filter allows using both reaction similarity values independently. Therefore, when searching large reaction collections, one may first dig into reactions that contain the same transformation as a drawn query reaction. In a second step one may then increase the periphery similarity threshold to check, whether there are reactions among the already found ones that share structural elements not taking part in the reaction.